LASTEST NEWS
homepage  LASTEST NEWS
Prof. Jiandong Ding’s group wins the first prize of science Award of Ministry of Education with their project on “Injectable the

The certificates of scientific and technological achievements in 2013 have been announced by Ministry of Education in 2014 February. A total of 311 projects received the reward, among these, 120 projects received the first prize of natural science. Prof. Jiandong Ding and Associate Prof. Lin Yu of Department of Macromolecular Science and State Key Laboratory of Molecular Engineering of Polymers wins the first prize of science Award of Ministry of Education for the project “Injectable thermogels”.

Their scientific achievements mainly aimed at a class of injectable and biodegradable thermogels. Such polymer/water system is a free-flowing fluid at low or room temperature and spontaneously turns into a semi-solid hydrogel at body temperature. Therapeutic drugs or cells can be easily incorporated into the thermogel by simply mixing them with the polymer aqueous solution at low temperature, and then the system can be injected to the target site of warm-blooded mammals to form the depot for drug delivery or the scaffold for tissue engineering. Meanwhile, spontaneously physical hydrogels are one of unique scientific phenomena and revealing of thermogelation mechanism and mastering of rules of molecular design are challenging.

According to the thought of basic research for application, Ding’ group focuses on the design of injectable thermogels based on the building blocks of poly(ethylene glycol) (PEG) and biodegradable polyester. In the past decade, several crucial scientific problems of thermogels have been solved by Ding’ group, which will be beneficial to the biomedical applications of these thermogelling systems in the future. 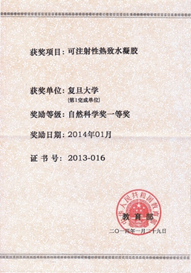