In winters, apart from the need of warmth, people are also paying more attention to thinness, comfort, and beauty. Spontaneous heating fabric (SHF) has attracted an increasing attention of consumers. It can actively generate heat to achieve rapid warming and continuous warmth preservation, which is in contrast with traditional cumbersome clothing that prevent heat loss by controlling heat convection and passive conduction. However, almost all the SHFs on the market are functionalization of synthetic fibers, which lack the skin affinity and comfort in comparison to the natural fibers. In addition, the fabric color becomes dark because of the functional particles added.

Biomacromolecule research group has been committed to the research and development of high-performance and functional regenerated silk fibroin fiber for many years. Recently, they have successfully developed a kind of spontaneous heating silk fabric, which is almost colorless. In the future, it is expected that people can also wear light, comfortable, warm and dyeable silk clothes in winter.

In order to overcome the difficulty that nanoparticles are usually hard to disperse uniformly in the spinning dope, they first prepared the copper sulfide nanoparticles (CuS NPs) with near-infrared (NIR) absorption property by using regenerated silk fibroin (RSF) as the biological template. Then, trace CuS NPs prepared in RSF solution (no more than 100 ppm) were added into the RSF spinning dope to prepare colorless RSF/CuS hybrid fibers via wet-spinning process. The tensile test of the RSF/CuS hybrid fibers (Figure 1A) showed that the toughness was improved with the addition of CuS NPs. The temperature of RSF/CuS hybrid fiber bundles (see Figure 1B) increased 18.5ºC within 3 min under 1064 nm laser irradiation with power density of 1.0 W/cm2 (Figure 1C and D). The laundering durability showed in Figure 1E suggested that the RSF/CuS hybrid fibers had a high laundering stability. 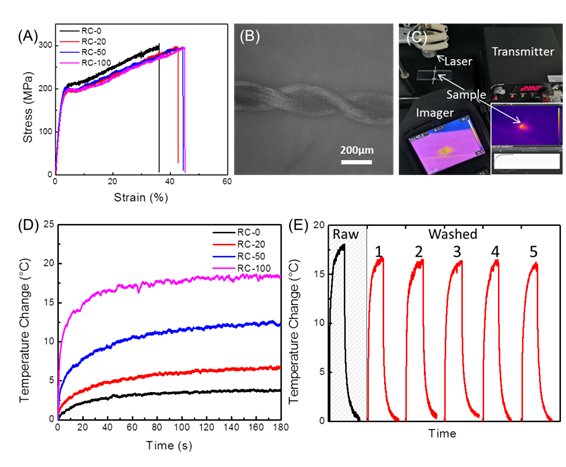 Finally, these RSF/CuS hybrid fiber bundles were woven into silk fabric (Figure 2A) or embroidered on a cotton fabric (Figure 2C). Under the simulated sunlight, the temperature of RSF/CuS fabric increased to more than 40ºC from room temperature (Figure 2B). In addition, the pattern of embroidery displayed a significant difference in temperature increase as compared to cotton matrix (Figure 2D). 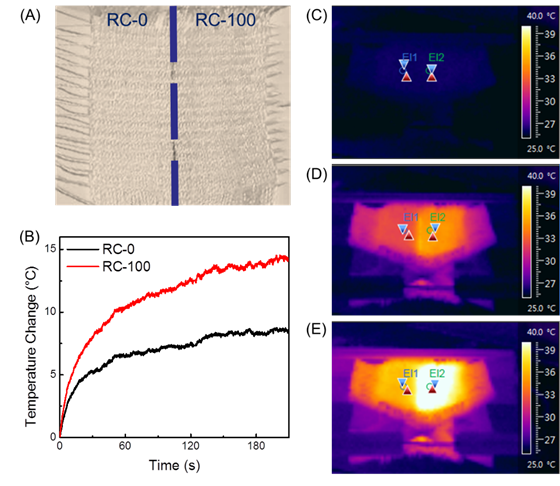 Figure 2. Optical image (A) and infrared image at 210 s under the irradiation of simulated sunlight (B) of hand woven pristine RSF fabric (RC-0) (left in A) and RSF/CuS fabric (RC-100) (right in A). Optical image (C) and infrared image at 200 s under irradiation of simulated sunlight (D) of RSF/CuS hybrid fiber cross embroidered cotton fabric.

In conclusion, Biomacromolecule research group successfully prepared an almost colorless RSF/CuS hybrid fiber by wet spinning, which may have great potential in the fabrication of dyeable, light, and comfortable silk functional fabric with spontaneous heating characteristics under sunlight.

The related paper has been published online in the Biomacromolecules with the title of “Colorless Silk/Copper Sulfide Hybrid Fiber and Fabric with Spontaneous Heating Property under Sunlight” (DOI: 10.1021/acs.biomac.0c00170). The first author of the paper is Mr. Haipeng Wang, a master's degree student. The corresponding authors are Prof. Xin Chen and Prof. Jimei Ma, a visiting scholar from the College of Textiles, Zhongyuan university of technology. The co-authors are Prof. Zhengzhong Shao, Prof. Jinrong Yao and Dr. Qinglin Dong. This work was supported by the National Natural Science Foundation of China. See details: