Although organic luminogens normally emit from their lowest excited state (the first excited state) according to Kasha’s rule, some anomalous cases have been found that can produce emission from higher excited states due to their ultrafast radiative rate or large S2-S1 energy gap. Recently, the exploration of this perspective is becoming prosperous (J. Phys. Chem. A., 2011, 115, 8344; Chem. Rev. 2012, 112, 4541; Chem. Sci. 2016, 7, 655; Nat. Chem. 2017, 9, 83), since these so-called anti-Kasha's rule emissions can ideally improve luminescent quantum efficiency by avoiding additional consumptions from internal coversions and other forms of electronic relaxations. Thus far, scientists kept to pursue the design and development of various structures that can produce anti-Kasha's rule emissions (e. g. azulenes, thiones, pyrene, etc.) for theoretical and experimental interest (J. Am. Chem. Soc., 2011, 133, 11830; Chem. Rev., 2017, 117, 13353, etc.). However, to the best of our knowledge, to further strengthen the so-called anti-Kasha’s rule emission at the chemistry level are still limited.

Recently, Zhu’s group reported the synthesis and photophysical study of a molecular structure consisting of cyanostyryl-modified azulene and hexathio-benzene core to exhibit a largely enhanced multi-wavelength anti-Kasha’s rule luminescence. Such an emission pathway in this compound can be effectively tuned and strengthened in response to the aggregation-induced emission (AIE) effect as well as the fluorescence resonance energy transfer (FRET) process, which totally allowed a ca. 15-fold amplification of the quantum yield (QY) of this material as compared to the routine precursors. Moreover, the luminescence in this system can also be smartly regulated by many factors including protonation, light irradiation and solution type. The enhanced emission can even be maintained in the dye-doped polymer film, providing new visions for the development of advanced solid-state emissive materials. 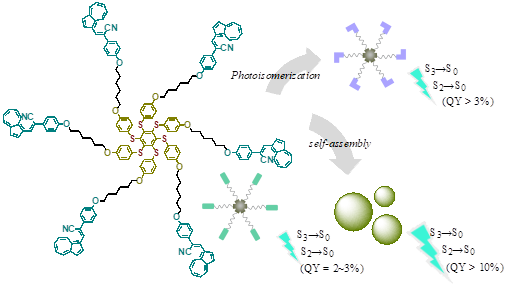