It has been crucial and prosperous to utilize outfield to assist the controlled alignment of block copolymers (BCPs) to form ordered microphase-segregated nanostructures, since the thermodynamic origins of BCP self-assembly often lead to nanostructures in short-range order (< 500 nm length scale) or with mixed orientation of phase-separated grains. Among various approaches, magnetic control is an ideal fashion that can be imposed without direct physical contact with the samples. However, this approach is limited by the weak magnetic response of organic or polymeric molecules and the necessity of expensive electromagnetic facility that is not accessible to most laboratories. There remains a great challenge to develop simple and generalized chemical strategies to fabricate BCPs that can achieve DSA with control of commercially available permanence magnets under ambient conditions.

Zhu’s group recently demonstrated that the creation of high magnetostatic energy on BCPs is possible, and consequently they can be efficiently controlled for aligning into high-order microphase-segregated nanostructures using a commercially available magnet (~0.35 Tesla of field), which is profoundly easy-to-handle in contrast to routine electromagnetic methods with high fields (5–10 Tesla). The general strategy relies on the first employment of a reversible non-covalent interaction between the BCP backbone and paramagnetic ions to enhance magnetic response upon the microphase-segregated self-assembly. They showed that the orientation upon the DSA of the BCPs can be perpendicular or parallel selectively, by varying the direction of applied magnetic field under ambient conditions. Meantime, the nanostructures are in long-range order (> 5 μm). 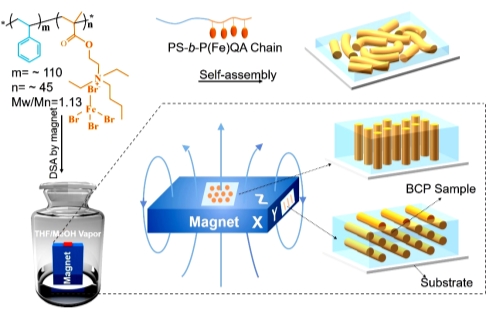 Figure 1. Chemical structure of PS-b-P(Fe)QA and the illustration of magnet directed self-assembly. Orange and blue domains represent P(Fe)QA and PS segment upon self-assembly, respectively. Random microphase-segregated self-assembled structures were obtained in the absence of the magnet. Magnetic alignment occurs on the basis of the creation of high magnetostatic energy with effective anchoring of paramagnetic ions for microphase-segregated self-assembly, leading to the orientation of the cylindrical domains along the field in the perpendicular or parallel direction to the substrate. 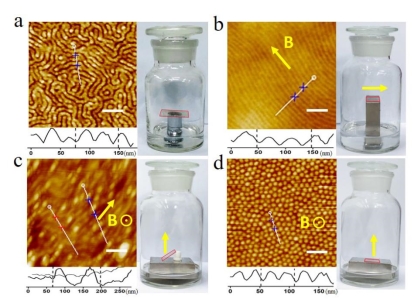 Moreover, the paramagnetic metal component can be removed via water rinsing after magnet DSA, leaving the aligned nanofeatures preserved with the original electrostatic binding site. In this way, it can serve as a template for patterning follow-up functionalized species upon the high-ordered structures. The related paper has been published in Small, with Ms. Bingbing Yue in the group as the first author. See details: