Some amphiphilic copolymers in water can undergo a reversible sol-gel transition upon heating. If the transition temperature lies between room temperature and body temperature, the aqueous system can be readily mixed with drugs or cells at room temperature, and the mixture is injectable; once being injected into body, the formulation is physically gelled spontaneously under the stimulus of body temperature, and the gelation is free of any chemical crosslinking. The temperature-induced phase transition endows this material great potential in clinic. Nevertheless, the structure and mechanism of the thermogel are still unclear, which limits the application and further modification.

Based on experiments and computer simulations, Ding’s group revealed the intrinsic structure and the mechanism underlying thermogelling. The micelle at a low temperature might be a crew-cut one. With an increase of temperature, the corona collapses due to the reverse thermosensitivity of the relatively hydrophilic block PEG. If the collapsed corona in an original crew-cut micelle cannot totally wrap the core, a semi-bald micelle is formed. Owing to the hydrophobic property of the micellar core, the exposed areas of different micellar cores might contact to reduce the total exposed area, which promotes the aggregation. Then, a hydrophobic channel is formed and acts as a physical crosslinking point between semi-bald micelles. A thermodynamic sol-gel transition happens with occurrence of a percolated micelle network, which belongs, in light of statistical physics, to a percolation phase transition.

Ding’s group also proposed the prerequisites for the design of the thermogellable system based on their findings. 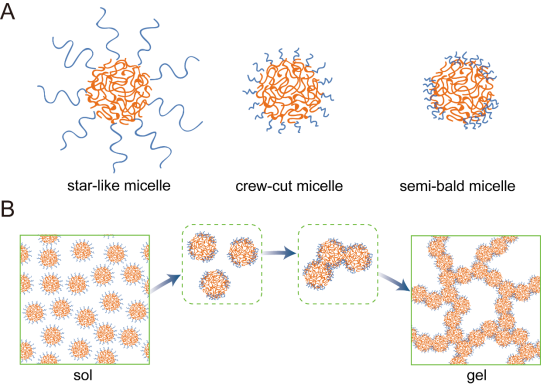 This work has been published in Macromolecules with a PhD candidate Mr. Shuquan Cui as the first author. See details：Shuquan Cui, Lin Yu and Jiandong Ding*, Semi-bald Micelles and Corresponding Percolated Micelle Networks of Thermogels, Macromolecules, 51, 6405-6420 (2018).