By combining biodegradable macromonomer synthesis, block copolymer micelle nanolithography and transfer lithography, Ding’s group prepared nonfouling biodegradable hydrogels decorated with a nanoarray of cell-adhesive arginine-glycine-aspartate peptide. They further examined adhesion and differentiation of mesenchymal stem cells (MSCs) on the hydrogel surfaces with well-controlled degradation rates in cell culture media. Both the matrix stiffness and degradation rate influenced the cell behaviors; while adipogenic differentiation of MSCs can be understood by the lowered stiffness, the osteogenic differentiation was contradictory with common sense because an enhanced osteogenesis on soft hydrogels was found. Higher degradation rates were suggested to account for this interesting phenomenon in the sole osteogenic/adipogenic induction and even more complicated trends in the co-induction. Hence, the degradation rate is a dynamic cue to regulate cells, which should be paid attention to in design of degradable biomaterials for regenerative medicine. 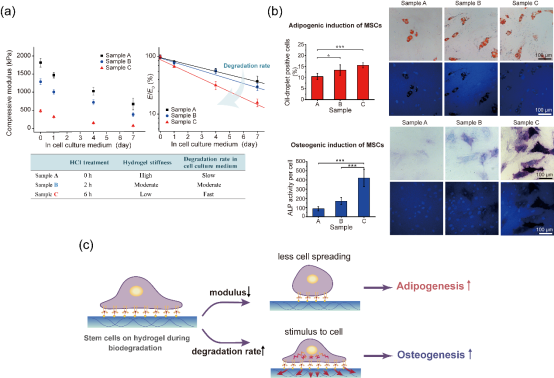