Natural biopolymers possessed perfectly defined chain length and monomer sequences such as nucleic acids, proteins and polysaccharides. Their chain length, sequence and chirality were strictly controlled in biological systems, which ensured that they could accurately transmit genetic information and perform biological functions. The precise control of primary sequences to achieve molecular complexity and structural diversity is a basic requirement of almost all organisms in nature (Science2013, 341, 1238149.). In 1963, Merrifield first proposed iterative synthesis to prepare sequence-defined polypeptide on an insoluble support (J. Am. Chem. Soc.1963, 85, 2149-2154.). This iterative synthesis in solid-phase had become one of the premier methods for synthesizing other natural biopolymers as well as artificial sequence-defined polymers, mainly because of its ability to achieve sequence accuracy comparable to nature and its ease of automation via simple reactions and purification processes. However, the insoluble solid supports were usually expensive, and the heterogeneous reactions greatly limited the coupling efficiency in solid-phase synthesis. To solve these problems, various strategies were utilized to synthesize sequence-defined/controlled polymers in solution-phase, such as iterative sequential approaches, iterative exponential growth strategies, and single monomer insertion methods. These methodologies increased the diversity of polymeric backbone, and they achieved precise control over the monomer sequence and the functionalization of side chains, which had opportunities to develop materials for data storage and biological applications.

Stereochemical structure had been reported to be precisely controlled in sequence-defined polymers in recent years, but topological regulation had never been shown in the synthesis of sequence-defined polymers (Fig. 1A). The regulation and synthesis of the topological structure were highly desirable in the synthetic chemistry of macromolecules, since different topologies such as linear, branched, star, brush, and cyclic endowed polymers with unique properties. We proposed the iterative synthesis with precise control of the regiochemistry of aromatic monomer for the preparation of regio- and sequence-controlled conjugated polymers with different junctions and topologies, which should be perfect models for studying the relationship between structure and performance. 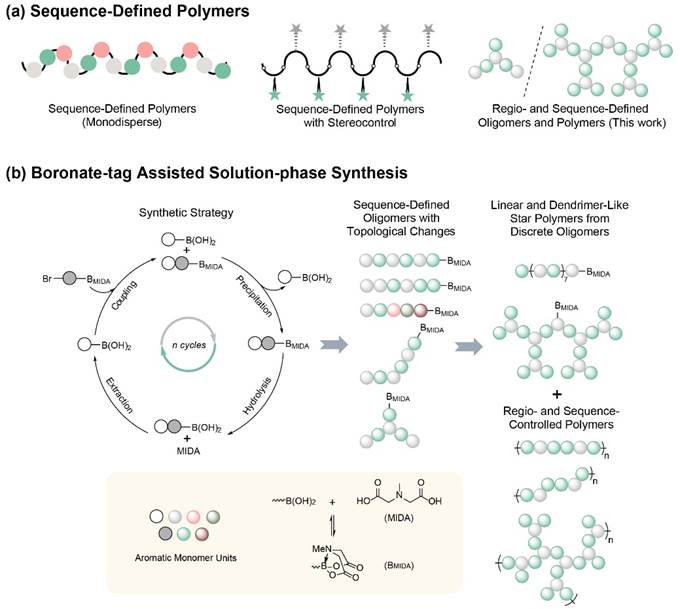 N-Methylimidodiacetic acid boronic acid esters (MIDA boronates) are stable boronic acid surrogates used for Suzuki-Miyaura cross-coupling, and MIDA boronates showed significant differences in solubility compared with boronic acid and also an unusual binary affinity for silica gel. Based on this, Pan Research Group (www.panxlab.com) from the Department of Macromolecular Science and State Key Laboratory of Molecular Engineering of polymers, Fudan University published a paper entitled “Regio- and Sequence-controlled Conjugated Topological Oligomers and Polymers via Boronate-tag Assisted Solution-phase Strategy”in Nature Communications on October 6. In this paper, MIDA boronates were employed as the tags in the liquid phase iterative synthesis and the precursor of boronic acids to prepare regio- and sequence-defined oligomers and sequence-controlled polymers (Figure 1b). 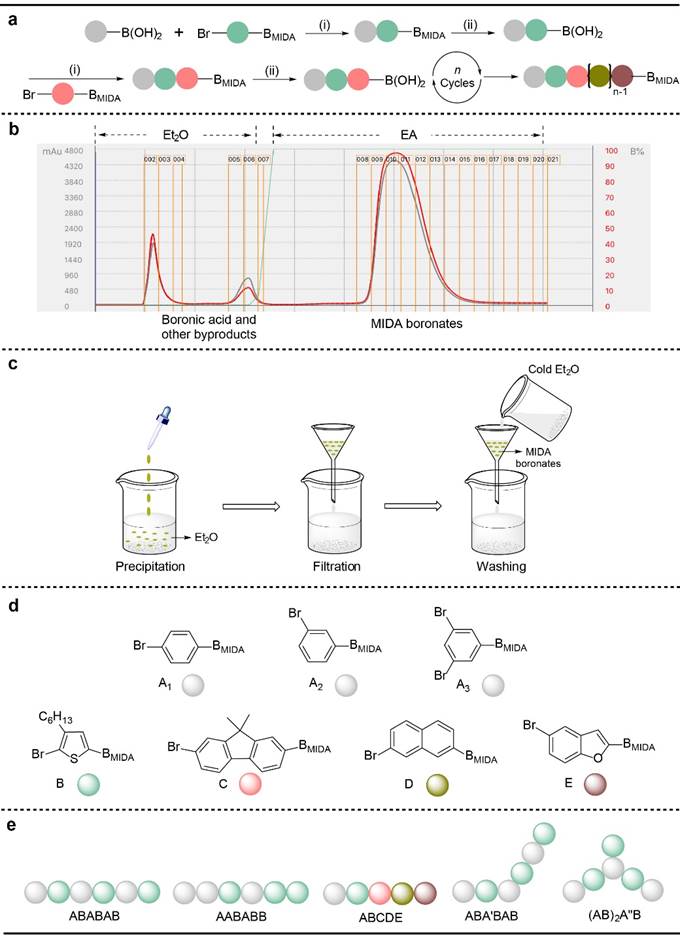 These synthesized regio- and sequence-defined oligomers could undergo iterative exponential growth and polycondensation reactions to fabricate regio- and sequence-controlled topological polymers, such as linear, branched and dendritic polymers. The effects of para- or meta-junction, topology and sequence were also discussed. As shown in Figure 3, the polymers poly(BAB), poly(BA'B) and poly(BA''B) had similar molecular weights and different topologies, which could emit different colors of fluorescence under ultraviolet light. Therefore, the topology had a significant effect on the optical properties of conjugated polymers, and this synthetic method was expected to prepare functional materials with different application fields, such as data storage, organic electronics, etc. 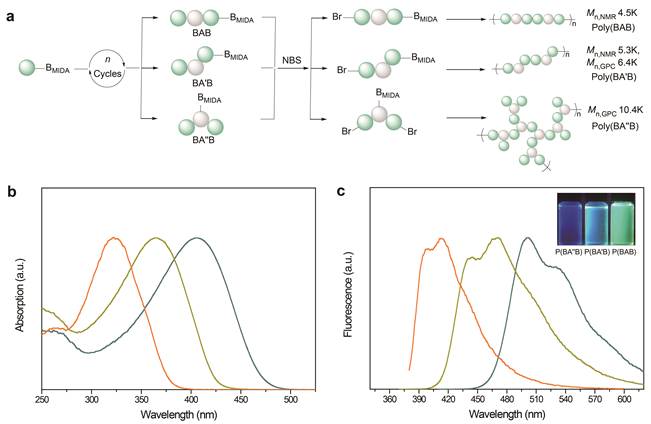 This work is published in Nature Communications now, paper links: https://www.nature.com/articles/s41467-021-26186-y. Dr. Chaoran Xu from Fudan University is the first author of this paper, and Prof. Xiangcheng Pan and Prof. Krzysztof Matyjaszewski from Carnegie Mellon University are the co-corresponding authors. The research is supported by the National Natural Science Foundation of China, Fudan University, the State Key Laboratory of Molecular Engineering of Polymers and the Department of Macromolecular Science.